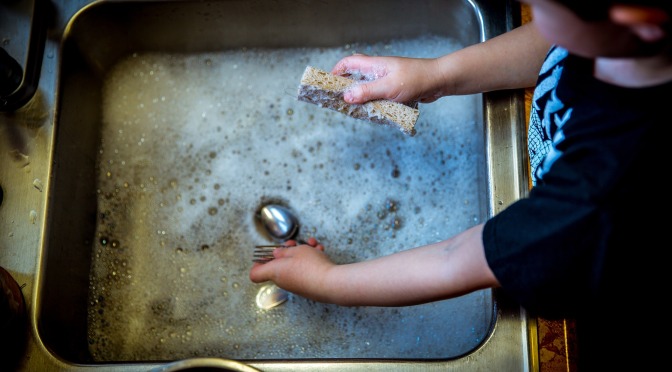 I stood at the chipped green laminate counter spreading peanut butter on two slices of soft white bread, attempting to make lunch the only way a 6 year old can.  Linda, the wicked witch of the living room, came in, her nose crinkled like she smelled something bad. I couldn’t tell if that was a special look just for me or if she always looked that way.

“Don’t leave a mess on the counter when you’re done,” she said.  “And make sure to empty the dishwasher and clean the dishes in the sink.  You were supposed to do that last night.”

I nodded as I dipped the knife into the purple ooze of grape jelly, peanut butter melting into the sticky goodness.

“Did you hear me?”  Her voice rose to a screech.

“Answer me when I speak to you!”

I nodded again and she smacked the back of my head hard enough my chin hit my chest.  Tears stung my eyes but I wouldn’t let them fall.

“Yes, ma’am,” I repeated as she stomped out of the room.

I topped each gooey slice with another slice, then put the sandwiches on two plastic plates from the dishwasher.  Setting them on the kitchen counter I called, “Jack, lunch!”

Daddy popped his head in through the kitchen door.  “Not so loud, pumpkin. Linda has a headache.” I turned so he wouldn’t see me roll my eyes.  I had learned early on not to let him catch me being disrespectful.

I trudged into the living room where Jack was playing with a Transformer I had brought from Mama’s.  He was cross-legged on the foldout couch where we slept, the sheets tangled at the end of the bed. I never understood why Daddy couldn’t get a place big enough for us to have a bedroom.  Between him and Linda they had three cars and a fishing boat. Seemed to me he could have arranged something for us.

“Come eat so I can get the kitchen cleaned up before Cruella comes back,” I said.

Jack continued to play with the Transformer.  I grabbed for the doll – he hated when I called it that – and he pulled it away just before I could get it from him.  “Go eat your lunch,” i repeated.

He went back to twisting the Transformer into a car.  I reached for it again and he hit me with it hard on the back of my head, right where my skull meets my neck.  “Dad,” he called. “Katie hit me!”

He scooted off the bed right before I could make his accusation true.

I took off after Jack right as Daddy walked in.  He grabbed my shoulder and pulled me to a stop. “Leave your brother alone.  I told you Linda isn’t feeling well. Why can’t you just be quiet for once?”

I wanted to tell him it was all Jack’s fault.  He was the one who hit me.  But I knew he wouldn’t believe me.  Jack was everyone’s favorite and I was Cinderella – there to do chores but not really part of the family.  I dropped my head and mumbled, “Sorry,” before heading back to the kitchen.

Jack was sitting at the small glass-topped table, a wide grin splitting his face.  I snatched the plate off the counter, almost sending his sandwich to the floor in my haste.  As I put it in front of him I leaned in close and whispered, “I otta let you starve.” I wouldn’t have thought he’d be able to smile any more than he already was, but I was wrong.  He started swinging his leg as he took a bite of his sandwich.

“Try it,” he said around a mouthful of bread.

I sighed.  Even a 4-year-old knew I was bluffing.  How is it even my stupid brother is smarter than me?

I turned to start emptying the dishwasher.  I didn’t feel like eating anymore.

Linda waddled in as I was stretching up to put a couple of glasses into a cabinet just beyond my reach.  Her shriek almost caused me to drop them. I pushed them up on the shelf just before they toppled to the counter.

“Your Mama might let you live like pigs but here you’re expected to clean up after yourself Katherine.”  I cringed at the use of my name. No one but Linda called me that. I hated it, and I hated her for using it.

She leaned in real close like I’d done to Jack.  “Don’t talk back to me little girl or I’ll have your Daddy wash that mouth out with soap.”

Oh how I wanted to spit in her face.  It was right there, begging for it. But I knew I’d pay if I did.  Instead I looked at the ground and said, “Yes, Ma’am.” As I turned to wipe the offending crumbs from the counter I glanced at the clock on the microwave.  When is Mama going to come take me home?