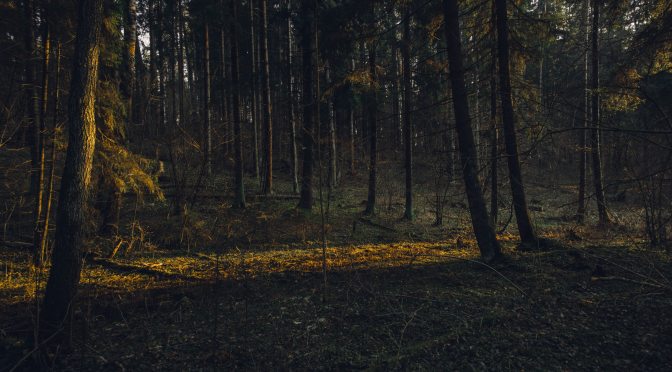 I ran through the woods, my heart pounding in my chest, my angry lungs burning as they futilely tried to pull more oxygen into my body. As I propelled myself forward, I looked over my shoulder. I could see nothing but the shadow of a figure looming over the trail. Seemingly without effort the form approached ever closer, an ominous phantom moving with ease.

It appeared unhurried, as if the ending were already certain. Assured of success it had no reason to rush.

Suddenly a dusky gloom fell around me, the tall pine trees morphing into faceless beings, their branch-like arms reaching for me. As the needles brushed my skin tears streaked my dusty face forming muddy tracks down my cheeks. I had fancied myself a renegade but escape was futile.

You can still come back.

The thought came to me from the apparition, as if his words were spoken inside my head. With his message ringing in my mind I tripped on a root, falling to the ground. The pain radiated up my legs, expanding until it filled every part of me, like cancer invading my body. I lay motionless, waiting to be taken by the shadow.

Waking with a start I found the damp sheets tangled around my legs. I struggled to release myself, the terror of the nightmare still fresh. I kicked my legs frantically and pushed furiously at the folds. Gripped by panic one thought consumed me. I needed to leave, needed to escape.

Finally releasing myself from my bonds I sat up, as out of breath as if I’d actually been running.

The room was dark, the only light the dim illumination of the clock on the bedside table. My head spun as I searched the darkness, convinced Clay was in the room with me. The shadows around me felt menacing, as if they too were trying to get me. I snapped on the lamp next to me and flinched as the bright light stung my eyes.

I repeated the thought to myself, over and over, attempting to drown out the words from the forest.

Slowly the pain in my chest eased, my breathing returning to normal.

Yes, I would leave. That was unavoidable. I had no idea if he had been behind the flower at the diner or the music in my room, but I couldn’t risk staying. I had remained hoping to get some rest, a botched plan to say the least. Without any idea where to go it had seemed like the best option.

I checked the clock, 5:12 am. As I stood to gather my few belongings I considered getting breakfast at the diner. Since I didn’t have much food with me I thought it would be better to save it if I could, but I couldn’t sit around waiting. I needed to move. Deciding I would stop at the diner if it were open I checked the room one last time and headed out the door, not sure what the day would bring.

This post is in response to the daily writing prompts Renegade and is part of something longer I’m working on.

This post is a part of the story about the ex and comes after Just When I Thought I Was Safe.

7 thoughts on “How Could I Escape This Time?”