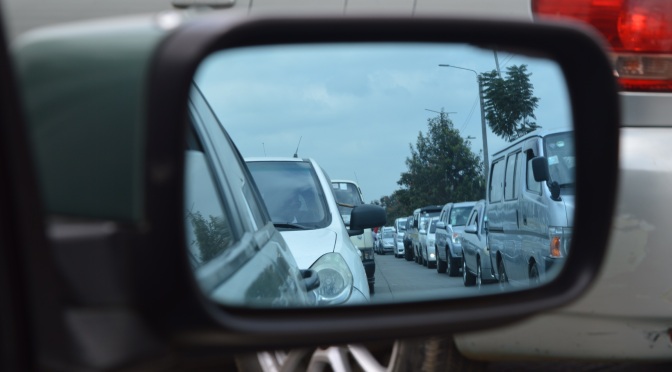 Mentally reviewing the conversation, I filled with grudging acceptance. My friendship with Lilly might be irrevocably damaged. I still didn’t understand why she was so angry. We had been friends for too long for her to make such a fuss over one weekend.

As the truck in front of me slowed unexpectedly I realized that was a problem I would need to think about later. The vehicles ahead of me gradually came to a halt as we approached congestion. It never failed. Traffic was always worst when I was in a hurry.

I eased my car into the breakdown lane to my left, trying to determine how bad the bakcup was. From what I could see it extended for miles, far beyond where the road turned out of sight. I grabbed my phone and pulled up Google maps, the red line indicating slow traffic that seemed to go on forever.

There was no way I could sit through that. I had to get off and either find a place to stay or maybe a different route. It might have been irrational but I felt vulnerable, trapped there among the cars that just a short time before had made me feel protected, concealed.

Slowly I worked my way across the lanes until I was in the far right lane. Again looking at the map on my phone I tried to figure out how far the next exit was. At this painful crawl it appeared it would be at least 15 minutes before I would reach it.

When I glanced up I scanned my mirrors, out of habit more than anything else. In the passenger side mirror I saw a silver car recklessly driving down the breakdown lane.

In shock I could do nothing as it approached.

This post is in response to the daily writing prompts Vex and is part of something longer I’m working on.

This post is a part of the story about the ex and comes after Why Was She So Mad at Me?

5 thoughts on “Who Would Drive So Recklessly?”