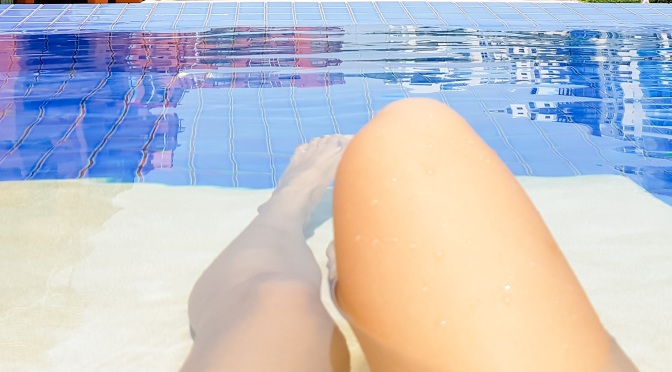 I awoke to the smell of salmon cooking on the grill, making my stomach growl. I stretched, and when Clay noticed my movement he grinned and waved large tongs in hello. Suddenly realizing I was still topless I sat up, looking toward the pool in search of my bathing suit. Not seeing it, I swung my legs around so I could stand, turning my back to him, now bashful about my nudity.

My leg had knocked something from the chair onto the ground. Bending, I was grateful to discover my lost clothing, which I quickly tied around me with relief.

By then Clay was putting the food on a platter so I joined him at the table on the deck. The food was expertly prepared and the wine he had picked paired perfectly with the fish. Until that moment I had never appreciated how wine could enhance the flavor of food.

I was only able to eat half of the filet he had prepared for me. Combined with the grilled veggies and salad that accompanied the meal, it was more than enough to satisfy my hunger. Full, I sat back with my wine in my hands, listening as he told a story about a fishing trip he’d been on when he was younger.

Noticing I had stopped eating, he paused to ask, “Don’t you like it? Is there something wrong with it?”

“No,” I replied. “Everything was delicious.” To prove my point I took another small bite of the salmon, adding a small hum of appreciation.

Momentarily satisfied he finished what he’d been saying, then began to clear the table. I offered to help but he insisted I relax. Returning from the kitchen he carried with him a large slice of key lime pie on a plate with two forks.

Sitting down, he moved his chair so that it was touching mine. “I hope you like key lime pie. This is the best there is!”

“I’m stuffed,” I told him. “It looks great but I really can’t eat anymore.”

He looked disappointed, like a little boy forgotten by Santa at Christmas. When he held a forkful in front of me to taste, I couldn’t say no. Rewarded by a huge grin, I decided a little pie wouldn’t hurt if it made him so happy. I smiled back at him and accepted another bite.

When the plate was empty I sat back with a groan, my stomach aching from the excess food. I felt cheerful though. The day had been amazing and I sincerely hoped I’d be able to see him again soon. I just wasn’t sure how to broach the subject. I didn’t have a lot of experience with men, and I had to admit that he was out of my league.

Taking a deep breath I decided to just say something. What was the worst that could happen? He obviously liked me, and even though he’d had opportunity to take advantage of me he hadn’t even tried, which showed both self-control and respect.

“Thank you for everything today. It’s been incredible. I hope we can see each other again.”

“Are you leaving?” His crestfallen look surprised me, but also gave me confidence that he truly did want to see me again.

“I have to work in the morning, and I really need a shower. Today has been wonderful though.”

Again upset by my answer, he looked practically despondent. I wanted to say something but I didn’t know what would help.

“Stay with me. You can use my shower,” he pleaded.

“I can’t. I’m not ready, and I don’t have any clothes with me anyway. Plus I have a conference call at 9 that I need to be on. Why don’t we get together tomorrow night?”

Woebegone at my imminent departure, he dropped his gaze. I couldn’t understand why it would bother him so much that I needed to go home.

“Please, just one more night. I’ll bring you home in the morning. I just don’t want to say goodbye yet. You can borrow some of my clothes. I promise, I won’t try anything. Have I yet?”

I couldn’t argue with that. At no point did he ever do anything I hadn’t wanted him to do. We had crossed a few lines I don’t normally cross so early, but I had been as eager as he had. I also had to concede that another night spent cuddling with him seemed appealing.

He sat next to me, his head hanging slightly as he looked up at me, his eyes silently beseeching me.

“Okay, if you can bring me home before 9 then I guess I can stay…as long as you can behave yourself!” I gave him a wink to take the sting out of my words. I felt a bit prudish but I just wasn’t ready for more.

He beamed at my words, then jumped up and lifted me from my seat, swinging me around. His excitement was contagious, and I was filled with joy. That I could make him this happy was a powerful feeling.

“I will,” he promised as he set me back on my feet.

This post is in response to the daily writing prompt Woebegone and is part of something longer I am working on.

This post is a part of the story about the ex and comes after .

10 thoughts on “How Could I Say No When He Desperately Wanted Me to Stay?”