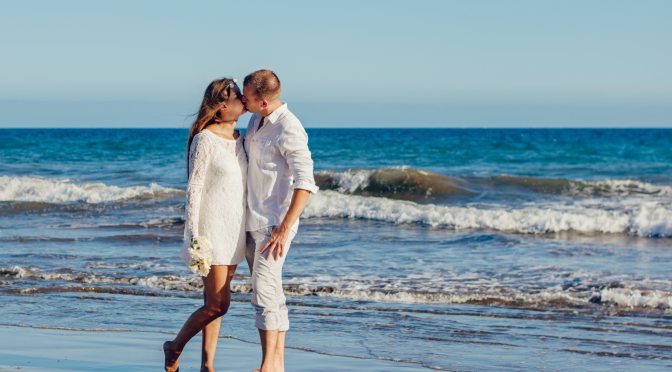 Later that day, we played on the beach, running along the shore, splashing in the surf and chasing each other. He would capture me in his arms, kiss me passionately and then set me free, taking up the chase again…until suddenly he didn’t let me go.

Instead, grabbing me by my waist, he lifted me off the ground. Surprised, I wrapped my arms around his neck to keep from falling as he used one hand to guide my legs around him, the other holding me securely against him. Safe in his strong arms I leaned my head back, laughing, as he walked backwards into the ocean. He stopped when the water reached his bare back, just deep enough to support some of my weight.

It felt like we were the only people in this little stretch of paradise as he dropped sensual kisses all over my exposed skin. I sighed with pleasure as he explored further, slipping my bikini top to the side to gain access to the delicate flesh it concealed. The hunger growing inside of me eclipsed the sense of propriety that usually dominated my actions.

I was so engrossed in the sensations coursing through me that I would have let him do just about anything. Any resolve I had to wait until we knew each other better melted under his skillful touch.

Completely lost in the moment I was startled when he abruptly stopped his assault. He grinned mischievously as he adjusted my top and was wiggling his eyebrows as he set me down in the water, clearly enjoying how he affected me. Struggling to regulate my ragged breathing and frustrated by his teasing I let the waves gently push me with the tide, first away from my tormentor and then against his solid form.

Eventually, tired from cavorting like children, we rested on a blanket in the sand, sipping wine and snacking on cheese kept cold in a small cooler he had thought to bring. He was so good at thinking of all those little details, making sure everything was perfect.

We talked for hours, his voice soothing as I laid on my back watching the clouds drift overhead. Feeling a little drowsy, perhaps from the wine, I listened as he told me about his life growing up. When he paused at the end of one story, I glanced over at him and found him on his side, his head propped in his hand, watching me with an adoring smile on his face.

No one had ever looked at me that way before.

When I closed my eyes I heard him rummaging through the cooler. Exposure to the sun had made my skin warm, and I jumped as something cold touched the sensitive skin where my neck slopes into my shoulder. I felt water dripping as the ice melted against me.

As he ran the frigid cube over my chest and between my breasts he suggested moving somewhere more private, a recommendation I was in no condition to argue with.

This post is in response to the daily writing prompt Exposure and is part of something longer I am working on.

This post is a part of the story about the ex and comes after A Frightening War Is Raging Within Me.