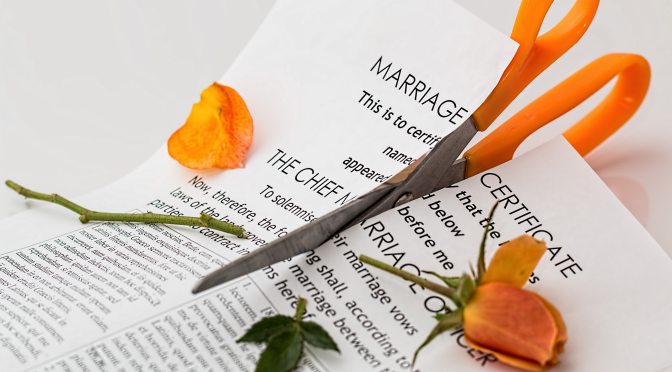 Have you ever made a decision in the heat of the moment, then regretted it after you calmed down? Have you had rivulets of sweat running down your back as you panic, wondering what you were thinking and how you are going to fix things?

I’m normally not a risk taker. I’ve always been pretty calculated and reserved in my decisions. I hate that feeling of cold fear and I’ve been pretty good at avoiding it most of my life. Or at least I was, until one day when I made the biggest decision in my life in the blink of an eye, over a seemingly petty argument.

Normally my ex and I didn’t argue. He is a pilot and was gone half the time anyway so there really wasn’t a point in spending his time here bickering. So when he was home everything was exactly the way he liked it. And for a long time that worked for both of us.

Then one day after we had moved to Florida I had a particularly bad day at work. I was under a lot of pressure because I was having trouble with a coworker (as much my fault as hers) and we were working on a big project I had no idea how to complete. So this day I decided that I needed to work after the kids went to bed. I put my work laptop on our dining room table and I worked from about 7 to 10.

By 10 my ex was furious that I hadn’t been watching TV with him. He slammed doors and started yelling at me, completely ignoring the fact that we had 2 sleeping children in the house. He was angry that I chose to work instead of spending time with him. He was only home a few days a week and he felt I should spend that time with him.

To keep the peace, I shut down my laptop and we went to bed. I didn’t apologize as I didn’t feel I had done anything wrong. But I did appease him to some extent so he wouldn’t wake the girls.

Fast forward to the following evening. I got home from work and was informed that he would be going to the local baseball game with his friend. I was also told that I would be driving them as they would need to take a cab home. I did this, as I’m not entirely sure I realized NOT doing it was even an option. But while he was gone a few things struck me about these two events, something that might not have occurred to me had they happened further apart.

First, it was wrong for me to work at home instead of spending time with him, but it was okay for him to have plans to go to a baseball game with his friend.

Second, had he told me he planned to go to the baseball game the second night, I could have done my work that night instead of the first, but he didn’t tell me his plans until the night of the game.

Third, he had no regard for what I might like or what might be going on in my world. He never once asked why I needed to work, why I might be stressed to the point that I was logged in for 3 hours trying to get things done.

That night he came home and we had another fight. A big one this time, or bigger than we had ever had. He asked me in the way he was accustomed whether I wanted a deeevorce (I’ve discussed this in another post). And because I was angry, madder than I’d ever been, I said, “Yes!”

My ex and I had been together since we were in college. I had never lived alone, never been solely responsible for a house, and I had no idea how to even proceed with a divorce. Needless to say, once I calmed down and was less angry I panicked. I was completely overwhelmed. I was engulfed in fear like I’d never experienced before.

He gave me multiple chances to change my mind. We went through marriage counseling, but by then the damage was already done. I began coming home after the girls went to bed on the nights he was home because I didn’t want to argue in front of the kids, and we were incapable of any other kind of communication those days. He would wait up for me, wanting to talk, looking to “fix” the relationship, even though he was completely unwilling to change in any way.

These discussions did more harm than good as after each one I felt completely trapped, as anxious to escape as a caged lion.

He wanted to know why this came up all of a sudden. Nothing had changed. For most of the 16 years we were together our relationship had been almost exactly the same. I would wait home for him while he went out doing his thing. I kept the house the way he liked it. I did the things he wanted to do but only did what I wanted when he was gone. He contributed as well, taking care of the cars and doing home improvements. This was how it had always been. There was clearly something wrong with me that was suddenly causing me to be unhappy with it.

His mother even called and suggested that I get a physical. She thought that there was something medically wrong with me that was causing this change. And honestly, I didn’t give her enough credit at the time. She was right. I was probably experiencing problems with my thyroid even back then and it’s likely this was part of why I was suddenly intolerant of behavior I had accepted for years. But I never admitted that to her.

I was bombarded with people who caused me to doubt my decision, but I had a couple of friends who encouraged me, who believed I was doing the right thing. I went through the motions almost like they were happening to someone else. It all kind of felt unreal which I suppose is a good thing because I don’t know that I would have followed through if it had been otherwise.

I guess you all know that I did make it through. The panic I felt lasted a really long time but it gradually faded. Although there were many times I questioned whether I’d made the right decision I know now, without a doubt, that I most certainly did.

And so I came to realize that sometimes our best decisions are made in the heat of a moment. Perhaps all we need to do is push past the fear and we will find the hidden reason for making that choice.

Pin this to save it for later!

This post is in response to the daily writing prompt Rivulet

28 thoughts on “What Do You Do When You Have Had Enough?”