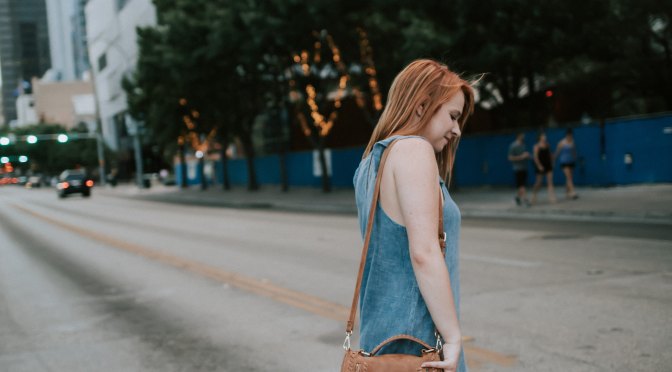 I work in the downtown area of a mid-sized city. As happens in a city, I park several blocks from my office. On the trek to my car one day I realized something startling. Except when crossing the street (to look at traffic lights and cars), my head was bowed the whole time and my eyes were directed firmly to the ground.

Now I’m not exactly sure how I came to this revelation but once I did I started to really understand how low my self esteem really was. On the drive home that day I thought about it and decided that this was one small thing that was under my control. All I had to do was look up.

So the next morning I left my car, head held high and turned the corner at the end of the block. I immediately came face to face with someone walking the other direction. Without a second thought I dropped my head and averted my eyes. This was going to be harder than I thought.

At the same time, I was losing weight and wearing more attractive clothes. I was growing out my hair and had it cut much more fashionably than it had been previously. As I started looking around more I noticed people looking at me. And this made me extremely uncomfortable; more than that…I was afraid.

I can’t say why I felt afraid, only that as these strangers looked at me I felt fear. This made it even harder to stop looking at the ground. I would look up, catch someone looking at me and my heart would pound. Immediately I’d look at the ground and want to be swallowed up.

But eventually I realized that a lot of these people looking at me were smiling. I often passed the same woman and one morning she complimented the dress I was wearing. I started wondering what people saw when they looked at me. Maybe they weren’t judging me. Maybe it didn’t even matter if they were.

With conscious deliberate effort I walked to and from the car with my head up…most of the time. As I started to feel better about my appearance this became easier.

Sometimes I still catch myself looking down. This is more because I’m lost in thought now, but I still make a conscious effort to look up when I catch myself doing this. I make eye contact with people as I pass them. I smile and say hello. These small daily interactions make it easier for me to walk into an event with a large group of people and start up a conversation, plus I’m seeing a lot more of the world around me!

What small change could you make?

Photo by Christin Hume on Unsplash

15 thoughts on “Make Small Changes that will Produce Exciting Results”